Deadpool has a uniqueness that is not possessed by any other superhero. He was sadistic, romantic, and a bit silly. To be honest I am not a fan of Marvel comics. So, from the many superheroes that Marvel has, I only know in part. I know most of the superhero character from watching the movie. This time I want to discuss the latest superhero movie Marvel antihero in 2016, Deadpool. I think Deadpool will be the same with most of the Marvel superhero, but he was not. Imagine was how the character of Deadpool if you look at the promotional material seliweran before the film was aired. 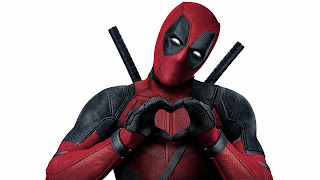 This film tells the story of a mercenary named Wade Wilson (Ryan Reynolds) who are willing to follow a scientific experiment to recover from the disease so far. Due to scientific experiments that followed this, Wilson has the ability / power to heal all the wounds on his body immediately. With its current strength, Wilson chasing group that almost made life lost.

As I said earlier, Deadpool fun, different from other superhero and he's trying to persuade the audience to interact. All things essentially the same comment super hero on this one. In jokesnya, Deadpool included some references from the world of film and music world such as, "Ripley from Alien 3", "Sinead O 'Connor," and many more. Sadistic action scenes, romancenya still okay, but unfortunately the flashback scenes a little bit boring and even make us wait there for what next action scene. Acting ordinary Ryan Reynolds wrote, not very special and a little reminiscent of his acting role as the superhero belonged to DC, Green Lantern. Her chemistry with her lover, played by Morena Baccarin also looks ordinary. Not to bad really, actually. Mr. Stan Lee is present or not in this movie? He is present anyway. This time he comes in the middle of the movie and his role is quite unique and different from the films he starred Marvel ever before. The soundtrack is present in the film is most popular and everybody does know. So, at least there is a plus for you that-may-not like this movie.

Intrigued by the director of this film? Tim Miller was the first time directing a feature film, but the name was first known as a creative supervisor for the film Scott Pilgrim vs. The World, and the maker of the opening title for The Girl with The Dragon Tattoo US version. Although your first time directing a feature film, Tim Miller is able to give a shot - a shot of cool and make Deadpool as a pleasant spectacle. So, what are you waiting? Just come into the closest movie theater in your town and see a superhero movie this one!
Posted by Unknown 12:03 PM Komentar