How to Train Your Dragon Movie Review

How to Train Your Dragon is one of the best films I've ever seen besides the animation is excellent and the storyline that is quite impressive, the film also inserts the advice that is not forever we beat everything with muscle but also requires brains, strategy and experience as hiccup , he could conquer the dragons are ferocious with just one touch imagine! one touch !! it makes a hiccup that has been underestimated became feared by residents of the village, there are many interesting things from this film so .. for those of you who have not watched and one animation fans should you watch this movie. 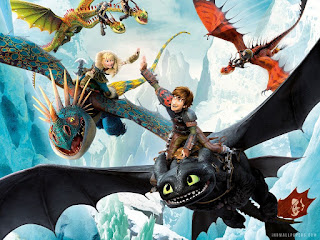 Synopsis How to Train Your Dragon

Being a Viking means to be able to hunt down and slaughter dragons always make mischief. That is the prevailing custom in the village of Hiccup (Jay Baruchel). Unfortunately, Hiccup is not the kind of kid that 'violent' like most kids Viking. Hiccup is a bright child and has a sense of humor.

It's become a bit of a problem for Hiccup for intelligence and sense of humor is not expected chieftain. Moreover, if the chief is Hiccup's father himself. Stoick (Gerard Butler) hope Hiccup could become a formidable Viking warrior and someday substituting a respected chieftain.

There was no other option but to include Hiccup in dragon training event in order to learn to be a man Hiccup the Viking definition. Unfortunately, when it encounters a dragon, Hiccup it was instead held a new approach and abandon traditional ways Viking. Hiccup choose friends with the dragon and try to convince the whole tribe that they did not need to be a nation of dragons and dragon slayer could be a good friend of man when man tries to hold approach.

Review How to Train Your Dragon

In addition to Pixar, only one animated film studio that can be animated product quality assurance. DreamWorks. Just look at the work of the animation studio that was initiated by Steven Spielberg's. SHREK, MADAGASCAR, BEE MOVIE, KUNG FU PANDA and lastly, HOW TO TRAIN YOUR DRAGON, everything is quality films both visually and in terms of the story.

HOW TO TRAIN YOUR DRAGON which is based on a book published in 2003 is actually just wanted to convey a message, do not be afraid to accept new things. But of course the message was not delivered in a vulgar manner. In this film 'novelty' is symbolized by the dragon that created the nation viking in that period is something that has not been understood and therefore be something scary. Hiccup is the epitome of the young generation who are more adventurous try something new even though the risk is they do not know is true.

With this simple story idea tum scriptwriter and then turn it into a storyline 'acceptable' by both children and adults, so the market share HOW TO TRAIN YOUR DRAGON it became more widespread. With the touch of two directors, Chris Sanders and Dean DeBois, a team of animators then translating this text into an interesting visual treat complete with 3D technology now is being popular.

With a blend of interesting storyline with animations that are not less good, decent taste mention HOW TO TRAIN YOUR DRAGON it as an entertaining movie without having to leave the quality as an art form.
Posted by Unknown 11:40 AM Komentar

Related to How to Train Your Dragon Movie Review